It was not about Slavery 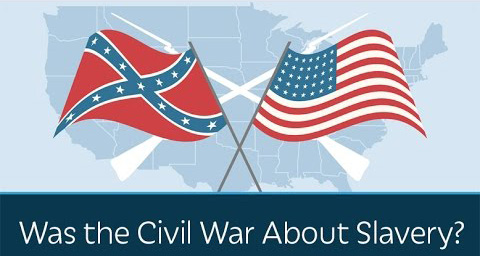 A Reasoned Explanation of the Real Cause

Many people think the Civil War of 1860-1865 was fought over one issue alone, slavery. Nothing could actually be further from the truth. The War Between the States began because the South demanded States’ rights and were not getting them.

The Congress at that time heavily favored the industrialized northern states to the point of demanding that the South sell its cotton and other raw materials only to the factories in the north, rather than to other countries. The Congress also taxed the finished materials that the northern industries produced heavily, making finished products that the South wanted unaffordable. The Civil War should not have occurred. If the Northern States and their representatives in Congress had only listened to the problems of the South, and stopped these practices that were almost like the taxation without representation of Great Britain, then the Southern states would not have seceded and the war would not have occurred.

I know for many years, we have been taught that the Civil War was all about the abolition of slavery, but this truly did not become a major issue, with the exception of John Brown’s raid on Harper’s Ferry, until after the Battle of Antietam in September 1862, when Abraham Lincoln decided to free the slaves in the Confederate States in order to punish those states for continuing the war effort. The war had been in progress for two years by that time.

Most southerners did not even own slaves nor did they own plantations. Most of them were small farmers who worked their farms with their families. They were fighting for their rights. They were fighting to maintain their lifestyle and their independence the way they wanted to without the United States Government dictating to them how they should behave.

Why are we frequently taught then, that the Civil War, War of Northern Aggression, War Between the States, or whatever you want to call it, was solely about slavery? That is because the history books are usually written by the winners of a war and this war was won by the Union. However, after following my family around since I was just a year old to Civil War Living History scenarios in Gettysburg and elsewhere, I have listened to both sides of the story, from those portraying historical figures, both Union and Confederate. Through listening to these people and also reading many different books, including some of the volumes of The Official Records of the Civil War, Death in September, The Insanity of It All, Every Day Life During the Civil War, and many others, I have come to the conclusion that the Civil War was about much more than abolishing the institution of slavery.

It was more about preserving the United States and protecting the rights of the individual, the very tenets upon which this country was founded. I personally think that the people who profess that the Civil War was only fought about slavery have not read their history books. I really am glad that slavery was abolished, but I don’t think it should be glorified as being the sole reason the Civil War was fought. There are so many more issues that people were intensely passionate about at the time. Slavery was one of them, but it was not the primary cause of the war. The primary causes of the war were economics and states’ rights.

Slavery was a part of those greater issues, but it was not the reason the Southern States seceded from the Union, nor fought the Civil War. It certainly was a Southern institution that was part of the economic system of the plantations, and because of that, it was part and parcel of the economic reasons that the South formed the Confederacy. The economic issue was one of taxation and being able to sell cotton and other raw materials where the producers wanted to, rather than where they were forced to, and at under inflated prices. Funny, it sounds very much like the reason we broke from Great Britain to begin with. The South was within their rights, but there should have been another way to solve the problem. If they had been willing to listen to Abraham Lincoln, perhaps the war could have been avoided. Lincoln had a plan to gradually free the slaves without it further hurting the plantation owners. He also had a plan to allow them to sell their products anywhere they wanted to and at a fair price. They did not choose to listen to the President, however, so they formed the Confederacy and the Civil War began.[/vc_column_text][/vc_column][/vc_row]