There is so much misinformation about the Sons of Confederate Veterans.  We are NOT affiliated with the KKK nor are we a bunch of racist bigots.  Hatred groups try to portray us as ignorant white low class rednecks but nothing could be further from the truth.  Among our many members nationwide are doctors, educators, attorneys, business owners, historians, clergy and politicians.  In addition to these, we count members who claim African ancestors as well as those claiming Native American ancestors.

There is a vast difference between those who embrace our proud Southern ancestral heritage and those who wave the Confederate Battle Flag in anger and defiance, using it as a vehicle to monger hatred against anyone not like themselves. 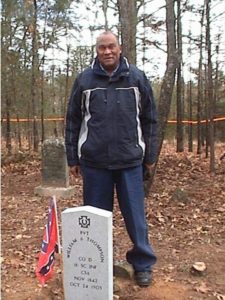 Tyrone Williams is not offended by the Battle Flag! His ancestor fought with the 16th South Carolina and he’s very proud of it. Tyrone has Dixie as a ringtone on his telephone and a Confederate flag license tag on his pickup truck. He is a ‘hard-core’ Confederate of Camp 1857 in Leavenworth, Kansas. Folks don’t mess with him because he’s a retired deputy federal marshal, packs heat and is 6’2″. God bless Tyrone for taking a stand! Compatriot Williams is shown standing over the Confederate headstone of his ancestor. 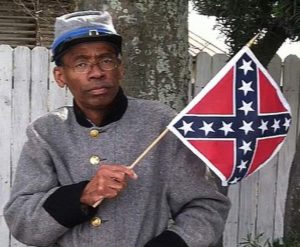 Al McCray is a black member of the Judah P. Benjamin Camp of Sons of Confederate Veterans, located in Tampa, Florida. Compatriot McCray (we members of the Sons call each other “compatriot”) sounds just like any one of us in his defense of the Confederacy. McCray said: “I understand the true nature of the war, and slavery was not the primary issue,” McCray said. “It was an issue of northern aggression and northern imperialism.” “I’ve always felt that way growing up in the south, that linking the flag to slavery and racism was just another way to keep division between the races. I always wondered why Lincoln didn’t free the slaves his first day in office if he felt so strongly about it.” 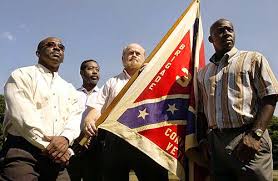 Members of the Jabal Early Chapter of the UDC join together to honor their Virginia Confederate forebears. 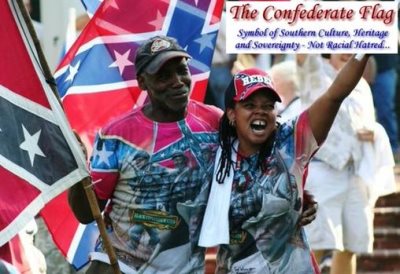 A Chesterfield woman is Black and proud to display the Confederate flag. The Virginia Flagger is speaking out and challenging stereotypes. “I’m sick and tired of my White Christian southern friends being attacked,” said Karen Cooper. “People displaying a flag is not a problem.” Karen says Confederate soldiers fought for state’s rights. She says it was not about slavery. Cooper says she plans to be buried with the Confederate flag. Standing beside Cooper is former NAACP president H.K. Edgerton who also defended the Confederate flag after protesters spray-painted “Black Lives Matter” on a Confederate monument in Asheville, North Carolina.